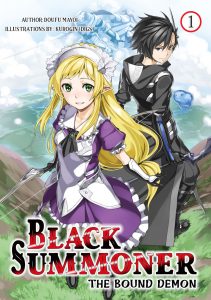 I know most of you guys are here for Secret Org haha, but hope you don’t mind me making a quick announcement about my actual published series 😛

Volume 1 of Black Summoner (novel) has gone up for sale, so feel free to grab a copy if you feel like it!

The MC is a battle junkie, there is an elf maid, there’s no oblivious MC nonsense, there’s a cute slime pet, and a gorgeous goddess. Not sure how I can sell it anymore, but for what it’s worth, here’s the backcover summary:

Waking up in a strange new place with no memory of his past life, Kelvin learns that he’s bartered away those very memories in exchange for powerful new abilities during his recent transmigration. Heading out into a whole new world as a Summoner — with his first Follower being the very goddess who brought him over! — Kelvin begins his new life as an adventurer, and it isn’t long before he discovers his hidden disposition as a battle junkie. From the Black Knight of the Ancient Castle of Evil Spirits to the demon within the Hidden Cave of the Sage, he revels in the fight against one formidable foe after another. Join this OP adventurer in an exhilarating and epic saga as he and his allies carve their way into the annals of history!

All purchasing details are on the Black Summoner series page. Yoroshiku~!